It’s Clear the Market HAS Changed

The Lamacchia Housing Report presents overall home sale statistics and highlights the average sale prices for single families, condominiums, and multi-family homes in Massachusetts and Southern New Hampshire for September 2018 compared to September 2017. It also looks at other metrics in Massachusetts like Homes Listed For Sale and Homes Pending, as they are often the best indicators for predicting future trends in the market. 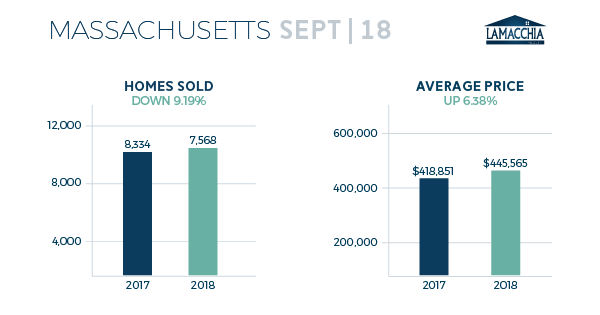 In Massachusetts, there were 1,353 homes for sale that made price adjustments compared to 1,109 in September 2017 which is the biggest sign of a slower market.  Anthony explained this in depth as one of his Three Reasons the market has changed in his September 11tth Op Ed as one of the biggest signs that the market had changed.  Price adjustments in September and October are more common as the fall inventory increases, buyers take their time, homes sit on the market longer, and sellers make price improvements to gain more visibility by potential buyers.

In September 2017 10,535 homes were listed for sale in Massachusetts compared to 10,899 in 2018, showing a 3.46% increase, almost exactly the same year over year percentage change that we saw in August 2018.  The increase in homes listed is no surprise given the increase in fall inventory and the recent change in the market, as covered by Anthony in his op-ed last month.

There were 8,462 homes that went pending in September 2017 and 7,900 in September 2018, showing a 6.64% decrease.  With pendings down it’s possible we see home sales decrease in the coming months.  Given how slow September started off its impressive that they were only down 6%.   That was thanks to the market really picking back up in late September. Since that time the market has been pretty busy but there is no denying we are in more of a buyers market than we have been in at least four years. 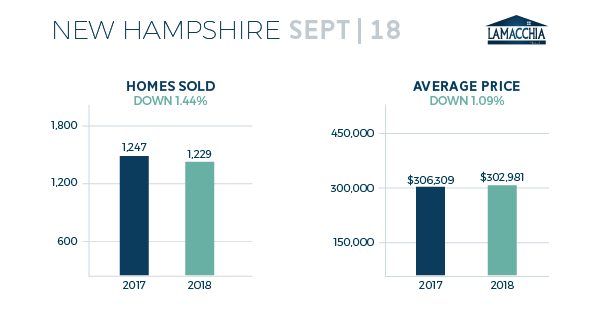 The fall market is fully in gear as we are almost at the close of October.  Looking at September’s performance, with sales being down and prices still increasing overall, we see that sellers are still optimistic and buyers are taking their time, with some passing on homes that have been on the market for a while because they think there must be something wrong with them.  For the record, there’s nothing wrong with that house – homes just tend to take a little longer to sell when there’s higher inventory.  Sellers are getting savvy and have been adjusting their prices to attract more buyers, as we saw with the increase of price changes this month- 1,353 in September up from 939 in August.  The increase in interest rates, now resting around 5%, has likely contributed to buyers resting on their heels and sellers adjusting prices to accommodate the cause for pause.  Aggressive pricing will help ease buyers into making that offer, despite the higher price for them to borrow.  Fall is still the best time to buy, so buyers should get out there and make an offer on a home before the deep freeze diminishes inventory and accelerates bidding wars once again.